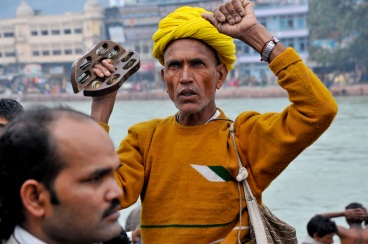 This post will start a series of one of my visits to Haridwar in North India to take pictures of the largest Hindu pilgrimage in 2010:

We started in the cold darkness to take a taxi from Dehra Dun in the northern state Uttarakhand to Haridwar, 35 miles away. The taxi delivered us to a staging area 5 miles from the actual bathing area. I never thought I’d be so cold in India.

We took a man-powered rickshaw for the first segment. I could see the puffs of his labored breaths as he took us a couple of miles.  I was amazed by the number of
people who had already been to the Ganga (Ganges) River for the ritual bath that is supposed to take away their sins at the Kumbh Mela.. Most were shivering in the early morning air

The Kumbh Mela was last held at Haridwar 12 years ago when an estimated 50 million Hindus made the pilgrimage over three months to bath in the supposed sacred River. Actually, the river near Haridwar is sacred because Hindu mythology  says that the gods fought over the nectar of life and four drops spilled out, one in Haridwar. An educated Hindu told be that it is the superstitions of the uneducated that make people believe the bathing washes away sin.

In previous Melas the local infrastructure was inadequate as well as security. In preparation for the 2010 Kumbh Mela, the Indian government announced with fanfare that they were spending 300 Crores ($70 million) to develop safety and infrastructure as 70 million people were expected.

We next got into a shared auto rickshaw for the mile or two. The others seemed somewhat subdued but there was an air of excitement especially as we neared the place where we had to walk and there were more and more “sin-free” pilgrims on the road back. They were dressed warmly with colorful head scarves, most carrying a small bundle with the wet clothes the bathed in.

The security was intense on this most auspicious day of Mahashivratri – Pratham Shahi Snan. There are 4 auspicious days of bathing during the Kumbh and Feb 12th  is the 2nd one. We started to see armed guards, both with the Sikh headdress and regular

army forces. As the road reached the river the guards motioned us to the right and we walked down to the concrete steps that lead to the river itself and the chains the pilgrims could hold onto to so the powerful currents would not wash them away. These steps are called “ghats” and not many know that the supposed sacred  area was constructed by the British. Indeed, the British Raj re-routed the Ganga River itself and put in the concrete and bridges outside the nearby town of Haridwar to save the lives of the Hindu population!

By this time is was light and there were larger numbers of pilgrims had followed us up the 8 mile road and surged past us to get to the area of the gnats that is considered more auspicious. The police had erected a barrier to slow down the 1000s of anxious bathers and sort of meter them out. We now found ourselves in the midst of one of these impatient crowds as they surged against the police cordons, many shouting out in a myriad of languages demanding passage. We worked our way to the front and my friend JG asked the guard for a way through just as the rope was dropped and we found ourselves on the “crest” of this wave of impatient humanity as it headed towards the bridge.

If you have ever rode the ocean waves you have a little idea how I felt as I was unable to resist and could not control my direction. I thought, “what would happen if I tripped? Before anyone could react I could be trampled by thousands of single minded folk.” Later we learned that 17 pilgrims had been trampled that day trying to get to that place for a holy bath that would remove sins and ensure that the next time they are re-incarnated it will be as a human.

The Hindu religion is very works and merit related. The more works, the less cycles of life. As a man, the Hindu’s worst fear is to 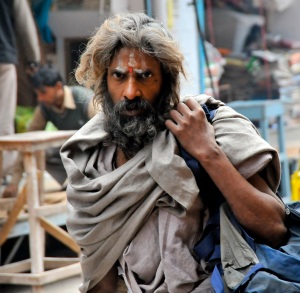 be re-incarnated as a dog or worse, a woman!  The highest plane a man or woman can attain is to give up everything and become a Sadhu or saint. These Sadhus are for the most part poor and beg for their foot but there are a number why are very wealthy and have a western following. Others keep prostitutes or child beggars. The small number of more unscrupulous Holy men have so far been ignored by Indian media but now with camera cell phones, blogs and citizen journalism they are coming to light.

This site uses Akismet to reduce spam. Learn how your comment data is processed.